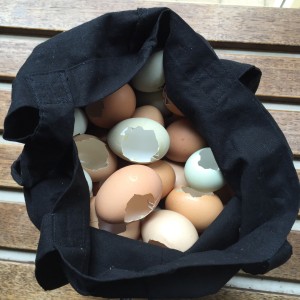 I’m just back from a week residency in the Tasdance studio where I had time to reflect on the processes shared with us by Claire Cunningham. During the week I worked with 250 egg shells ( a few were seen in a short interview that features on the blog from Feb 24). These egg shells were flown from Denmark, WA to Launceston, TAS. They mostly survived the journey and became powerful tools to use in my research into visual balance, repetition and disruption.

Last week I performed a solo that encompassed this research for a small gathering at the Tasdance studio. In November I’ll share this research with my home community of Denmark via four more solo performances for Brave New Works Festival. 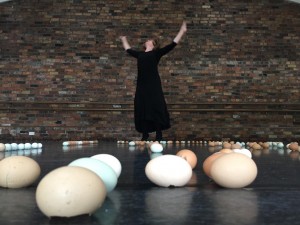 I was an actress in a play Black is the Colour, which also was part of the Melbourne Fringe Festival. It’s the first production by Deafferent Theatre and a two Deaf-women play and performed entirely in Auslan with English subtitles. An Australian play written by Daniel Keene, it is about friendship, with at times hazy boundaries, between two women. Director Jess Moody said “Relationships are forged and lost through language. Tonight I put the language of survivors, of the Deaf community, and of women on the stage.” It was an extremely satisfying project to do as it gave me the opportunity to try out a new art-form (acting) working with people I have never worked with before and tackling complex themes such as domestic violence, loss, grief and memory especially seeing the statistics of Deaf survivors of domestic violence are alarmingly high. 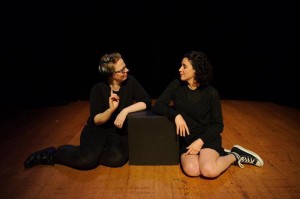 If you want to know more about Deafferent Theatre, you can visit their website:

I have two upcoming projects; dancing in a silent film directed by dancer/film-maker Jacob Edwards and a performance art project with Nicola Gunn. Nicola Gunn is a Melbourne-based performer, writer, director and dramaturg. This project, The Interpreters, will be performed in English, French, Auslan and Bunwurrung against the backdrop of a French Mansion in Melbourne. This is a work about the act of interpreting, about changing words into meaning and back again.

It has been a very enriching year and I feel so lucky (and exhausted!). I hope there will be more opportunities like Claire Cunningham’s workshops as they are so important for artists at different stages in their career to do.

A big thanks to everyone 🙂

Drumroll……I made my first choreographic work this year! 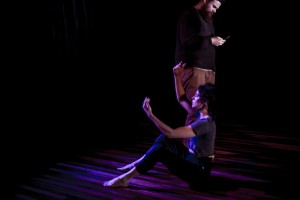 As a choreographer, I wanted to create a piece that was very physical and visual with no spoken text as I wanted to make this accessible for as many people as possible and make it something that almost everyone regardless of age and background can relate to i.e. that we now live in the Age of Distraction where we all are expected to participate in.

Things evolved very quickly and what are the consequences for us? I created a series of duets with my collaborator Amanda Lever, exploring giving attention to the distraction, the attraction of distraction and using distraction as focus. It was a successful season with full houses each show and positive reviews. I was paired up with a mentor, Vanessa Pigrum who is the Executive Director of Chunky Move.

Here’s a review from Plus Ones:

Only one week after Under My Skin finished, I went straight into another project with KAGE (a dance and physical theatre company based in Melbourne) for the second development of Out of Earshot which will premiere in 2017. I worked with three other dancers (Gerard Van Dyck, Elle Evangelista and Tim Ohl), and with drummer Myele Manzanza, under the direction of Kate Denborough. This work explores how everyone experiences sound, rhythm and silence differently. Sound isn’t something that is exclusive to hearing people. It’s something everyone and anyone can experience may it be through the ears or the body or as an insight. The same applies to silence. 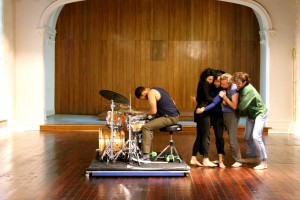 Silence is a sound and it has substance. It’s not an absence or emptiness. Again Claire’s workshop really helped me personally in this project. Sometimes I feel uncomfortable about whether I am being hired for my artistic skills or the fact I am Deaf. Even though Kate is an intelligent and sensitive choreographer, I had to steer the focus from ME and DEAFNESS to the other dancers and OUR individual and collective perspectives and experiences on sound and rhythm. 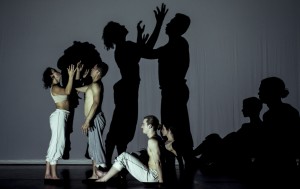 I’ve had a busy but fantastic year. I am so grateful for starting off the year with a week in beautiful and warm Fremantle doing an intensive with Claire Cunningham. It really changed the way I think about my work, and myself as an artist. Claire gave e the confidence to reclaim my voice and not to feel like I have to oblige with the generally-accepted idea of what dance is and who can be a dancer. That confidence infiltered into all of my dance projects this year. It has been very positive and empowering. I often revisit Claire’s workshop materials and insights to help guide my artistic practice. 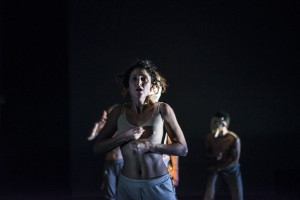 Under My Skin was performed at Next Wave Festival at the Arts House in North Melbourne and was a very successful season. We worked with media artist Rhian Hinkley and sound designer Russell Goldsmith who created images and sound merging access into the aesthetic design. They made sound visual for the Deaf performers and audiences. Goldsmith created sound that can be felt rather than heard which appeals to the body rather than the eardrum. 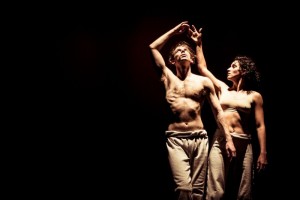 Here is a trailer: